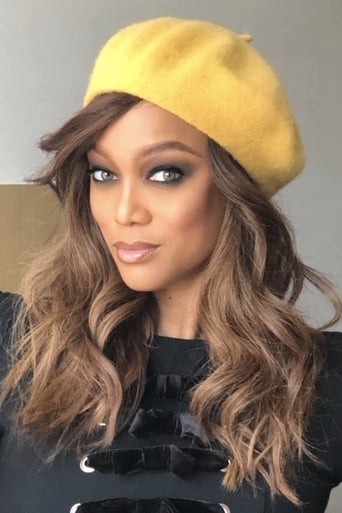 "A smart model is a good model," Tyra Banks was once quoted as saying, and she seems destined to prove it in every way. Now widely known as one of the world's foremost supermodels, Banks began her modeling career at the age of 17 with the Elite agency after flirting with attending college at Loyola Marymount. The 5'11" beauty was quickly discovered in Los Angeles, her birth city, and offered a healthy contract with cosmetics company Cover Girl -- becoming only the third African-American woman in the world to secure such an opportunity. Her striking looks and business savvy extended to several offers, including assignments with Ralph Lauren and various magazine covers (over 20 to be exact), including Sports Illustrated and most notably GQ, where Banks became the first black woman ever to grace the cover. In addition to various ads and runway gigs, Banks decided to branch out into feature films, scoring a few  high-profile gigs, starring as Omar Epps' love interest in John Singleton's racially charged drama Higher Learning (1995) and snagging a stint opposite Will Smith on TV's The Fresh Prince of Bel-Air. These breakout roles led to more film work, including a British sexploitation film called Inferno and a comic turn in 1999's Love Stinks with actors French Stewart and Bill Bellamy. In 2000, Banks landed a high-profile gig in the critically dismissed but lively Jerry Bruckheimer production Coyote Ugly. Banks would find a useful avenue for her skills as a producer, host, and co-creator of the competetive reality show America's Next Top Model, an immensely successful franchise that would run from 2003 to 2012. Though her self-absorbed personna would often find her the subject of mockery, Banks would also launch an unsuccessful music career, as well as a talk show, and a handful of other reality shows, like True Beauty, and Stylista. ~ Jason Clark, Rovi