"Is that guy following us?" CBS Films has revealed the full-length red band trailer for the upcoming horror movie Hell Fest, about a horror theme park that becomes a killing playground for a masked serial killer. The first teaser trailer showed some promise, but this new trailer really lets loose and it looks freaky as all hell. "A terrifying thrill ride from iconic horror producer Gale Anne Hurd and director Gregory Plotkin (Paranormal Activity: The Ghost Dimension), this September audiences will discover that it's fun going in… but it's hell getting out." Hell Fest stars Amy Forsyth, Reign Edwards, Bex Taylor-Klaus, Christian James, Roby Attal, and Matt Mercurio. This actually looks super creepy and violent and insane, they're seriously showing off all the gore and wow. That final shot - damn. Hard to even watch! Be careful out there. 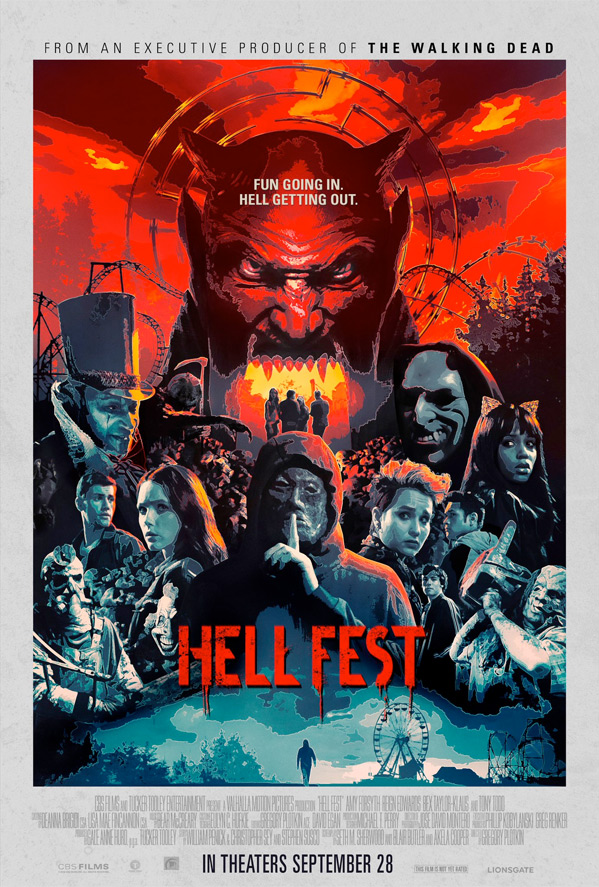 You can still watch the original teaser trailer for Plotkin's Hell Fest here, to see more footage from this.

A masked serial killer turns a horror-themed amusement park called "Hell Fest" into his own personal playground, terrorizing a group of friends while the rest of the patrons believe that it is all part of the show. Hell Fest is directed by filmmaker Gregory Plotkin, director of the film Paranormal Activity: The Ghost Dimension previously, after working for years as an assistant editor. The screenplay is written by Seth M. Sherwood & Blair Butler, with Stephen Susco and Gary Dauberman; from a story by William Penick & Chris Sey. This has yet to premiere at any film festivals or otherwise. CBS Films will release Plotkin's Hell Fest in theaters everywhere starting September 28th coming next month. Who wants to visit this place?